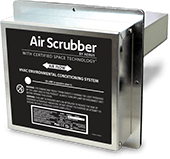 Learn about the Air Scrubber

We are now offering a new way to improve the air quality of your home- AirScrubber by Aerus. It substantially reduces odors, visible smoke in the air, and microbial populations on surfaces*, utilizing the patent pending ActivePure® Technology.

aExact conversion.
bThe Btu used in this table is the International Table Btu adopted by the Fifth International Conference on Properties of Steam, London, 1956.
Notes: Spaces have been inserted after every third digit to the right of the decimal for ease of reading. Most metric units belong to the International System of Units (SI), and the liter and metric ton are acceptable for use with the SI units.
Sources: General Services Administration, Federal Standard 376B, Preferred Metric Units for General Use by the Federal Government (Washington, DC, January 27, 1993), pp. 9-11, 13, and 16. National Institute of Standards and Technology, Special Publications 330, 811, and 814. American National Standards Institute/Institute of Electrical and Electronic Engineers, SVIEEE Std 268-1992, pp. 28 and 29.